The app brainwashes children by throwing them 50 challenges over a period of 50 days, which include self-mutilation, waking up at unearthly hours and watching scary videos and listening to haunting music sent by the curator. The last of the challenges is to kill yourself.
The catch of the game is that once you download it, you won’t be able to uninstall it as the app also hacks your phone. And, there is no backing out. Apparently, once you agree to be a part of the game, you are not allowed to back out. If you do, the creators threaten to get you or your parents killed, as they have all the information.
Also, the highly-illegal game is not available for download and is available only to a closed community, so instead of the teenagers seeking the game, the creators seek out their victims. 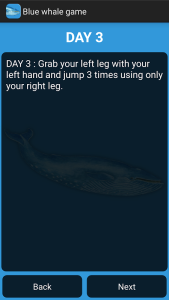 However, there is reason to rejoice. The game has not yet found a foothold in India.
Security researcher Kirit Gupta said, “I work closely with law enforcement, and if Blue Whale had come to India, we would have definitely been called to investigate. But it is possible for the game to hack the phone. There was this fairly simple game where you had to throw pins to burst the balloons, which saw a million downloads worldwide. But the game was purely made to steal WhatsApp information from users. An anti-virus too wouldn’t be able to help if the concept of the game is malicious and not the code. What Blue Whale is doing is targeted social engineering, where they send links to their targets. The links might be simple ones at first to see if you download, and then they send the game’s link and hack your details.”

What the game is all about: