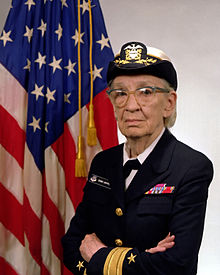 Fixing errors in computer programs is called debugging. This term was coined by Grace Hoppers who was a Rear Admiral in US Navy. A moth had gotten stuck in the gears of a computer Hoppers was working on. It stopped the computer from functioning. When the insect was removed the machine worked again. Hoppers called it de”bugging” of computer.

Owing to her accomplishments and her naval rank, she was sometimes referred to as “Amazing Grace”.The U.S. Navy Arleigh Burke-class guided-missile destroyer USS Hopper was named for her, as was the Cray XE6 “Hopper” supercomputer at NERSC.
On November 22, 2016, she was posthumously awarded the Presidential Medal of Freedom by President Barack Obama.