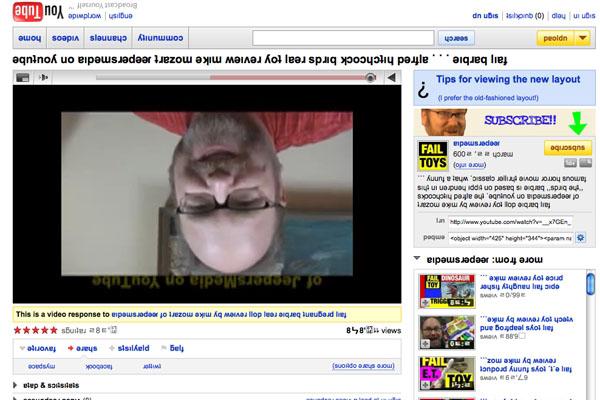 YouTube started April fool’s day pranks in 2008. Post that every year they successfully do it. In 2008 prank, all the links to the videos on the main page were redirected to Rick Astley’s music video “Never Gonna Give You Up”, also known as “Rickrolling” prank. Prank of 2009 was classic; they turned the page upside down when user clicked a video and they call it a new page layout. 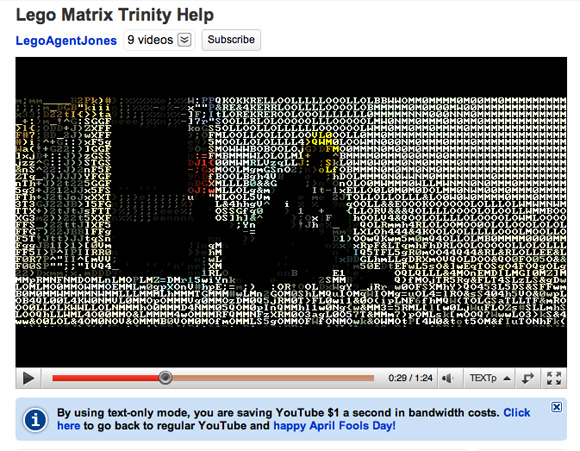 In April 1, 2010 The logo of YouTube was overlaid with ASCII text repeating the character “1”. The YouTube logo was a reference to some videos having a new quality setting called “TEXTp”. As Patrick Pichette, SVP and Chief Financial Officer, Google, said on the Official YouTube Blog, “For every person who selects TEXTp and keeps it on while you watch a video, you save YouTube $1 a second, resulting in potentially billions of dollars of savings for us. So if you care about YouTube, you’ll use TEXTp today.”
In April 1, 2011 That day, a button was added to the YouTube video player which, when clicked, would apply a video filter to the video and replace the audio with a recording of Rhapsody Rag, a piece typically played as background music to silent movies in 1911. If subtitles were enabled when watching the video, intertitles were displayed containing the dialogue. The upload page also featured an option to “send a horse-drawn carriage to me to pick [the video] up.” In addition, YouTube unveiled the “Top 5 Viral Pictures of 1911.”
In April 1, 2012 YouTube added a small disc on the right side of the YouTube logo, which when clicked leads to a page about a service called “The YouTube Collection.” It offered every YouTube ever uploaded on DVDs – dispatched in a fleet of 175 trucks. YouTube promoted the service with a video entitled, “The YouTube Collection: The Magic of YouTube in Your Hands.”

On March 31, 2013, Tom Liston, the Competition Director at YouTube, announced “YouTube’s ready to select the winner.” He said, “Tonight at midnight, YouTube.com will no longer be accepting entries.” He added, “After eight amazing years, it is finally time to review everything that has been uploaded to our site and begin the process of selecting a winner.” In order to do that, the site would be shut down and YouTube wouldn’t return online until 2023 when users would finally be able to see what judges thought was the “Best Video” ever … and nothing else.